MINISTER LUKAČ LAID A WREATH AT THE MEMORIAL SERVICE IN ZALAZJE 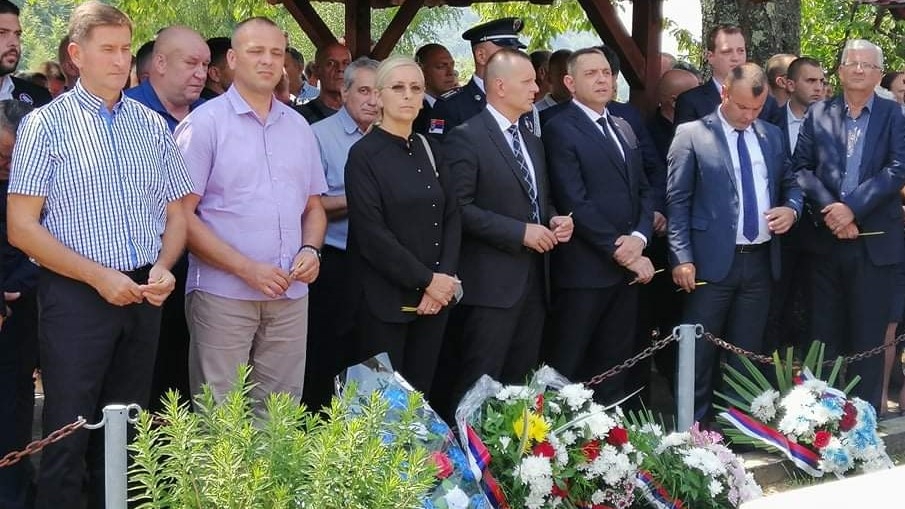 Flowers at the memorial were laid by the Republic of Serbia Minister of  the Interior Aleksandar Vulin as an envoy of the President of the Republic of Serbia, Head of Srebrenica Municipality Mladen Grujičić, Head of Bratunac Municipality Srđan Rankić, representatives of the Republic and Municipal organizations of families of captured and killed soldiers and missing civilians of Srpska, Association of war prisoners of the Birač region and organizations of former soldiers from Srebrenica and Bratunac.

On this day 30 years ago, strong Muslim forces from Srebrenica under the command of Srebrenica wartime commander Naser Orić continued the systematic and planned ethnic cleansing of Serbs in the Srebrenica Municipality, which began in April of that year.

In addition to the 69 deaths on Petrovdan in 1992, another 22 Serbs were captured and went missing, 10 of whom are still missing and there was a large number of wounded. After torture and abuse in the Srebrenica camps, all were killed, and the remains of 10 of them were accidentally found on June 10 2011 in Zalazje by a team searching for the missing Muslims victims from Tuzla. After more than a year, those remains were identified and buried in 2012 on Petrovdan, two were found and buried earlier, and another 10 Serbs are still missing from that day and are still being searched for.

With this Memorial service, 25th memorial program "Petrovdanski Dani" was concluded, which was organized by the Srebrenica Committee for commemoration of Serb victims on the occasion of the 29th anniversary of the Srebrenica Serb deaths.

Family members and representatives of the former soldiers and organizations of families of captured and killed soldiers and missing civilians from Srebrenica, again expressed their dissatisfaction today with the work of the Prosecutor's Office and the Court of BiH.

MINISTER LUKAČ LAID A WREATH AT THE MEMORIAL SERVICE IN ZALAZJE